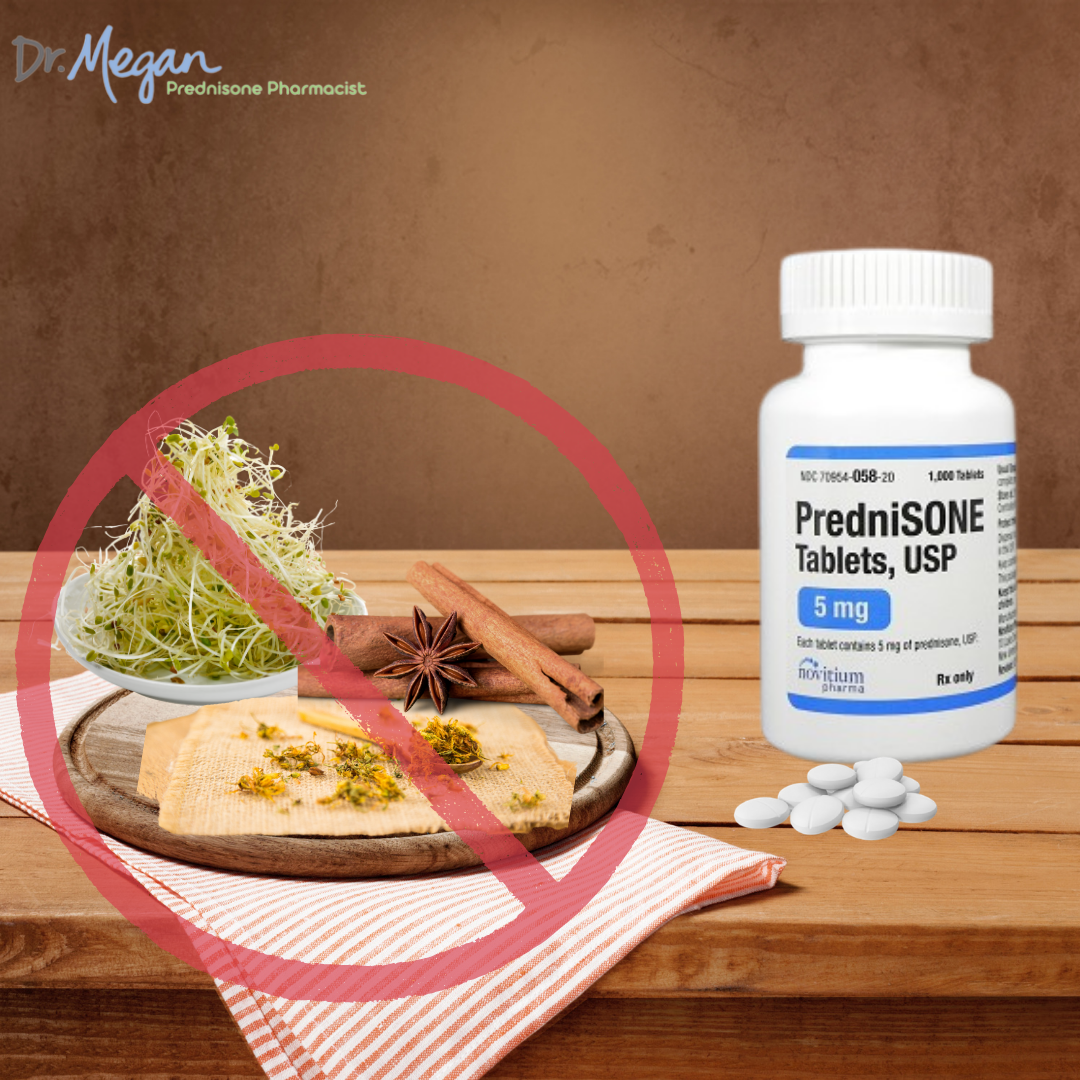 How to Minimize Drug-Drug Interactions to Decrease Prednisone Side Effects

First of all, prednisone is an amazing drug! It can do miraculous things, but in order to do its job, it has to go through your body. One of the things that happens is your liver has to break the drug molecule down from prednisone, into prednisolone.

That means your body is using your liver to make this drug work for you. That’s how the drug interactions happen because prednisone is being broken down by the liver.

We have to be careful with other drugs that are broken down by the liver because they might be broken down in the same way.

First I will cover which drugs are a problem; which drugs have a drug interaction with prednisone.

First of all, we have drugs that are broken down by the liver. So ketoconazole, it’s an antifungal drug. If you’re having a terrible fungal infection and you’re on prednisone, then taking both of these medications together is a drug interaction.

Prednisone can make your INR, the clotting numbers, go up or down. That means prednisone can cause a higher bleeding risk or a blood clotting risk. Things like that can happen because both prednisone and warfarin are broken down by your liver.

What about other side effects that could be caused by a drug interaction?

So one of the side effects I was always taught in pharmacy school that pharmacists should always warn people on prednisone about:

“You should always tell people to take prednisone with food, to stop the peptic ulcer issues.”

Well, guess what, they’ve recently discovered that the taking-it-with-food-thing didn’t really matter. Not as much as–guess what?–not taking the prednisone with certain drugs. Do you know which drugs those were? Taking prednisone with other anti-inflammatories.

The real problem does not come from taking prednisone on an empty stomach. The problem causing the peptic ulcers is actually a drug interaction between prednisone and other anti-inflammatory medications.

Those are all drugs that cause your GI tract to have problems. The combination of prednisone and these other anti-inflammatory drugs is just too much. Essentially, they are both working in the same pathway. According to UpToDate, it says,

“Using prednisone along with NSAIDs means you have a two-fold increased risk of a side effect in your GI tract.”

When you’re taking NSAIDs with prednisone, this statement is compared to people who just use NSAIDs alone. So basically that’s saying:

“You have a two times greater risk of having problems somewhere between your mouth and the other end (anus), if you’re using prednisone with NSAIDs.

This is compared to if you only use ibuprofen. Then here’s the real killer:

“The use of NSAIDs plus prednisone or other glucocorticoids is associated with a four-fold increased risk of side effects in the GI tract compared with not using either drug.”

That’s true for aspirin too. The levels of aspirin go up when you take aspirin plus prednisone, which can lead to increased risks for GI bleeding. So you have to be really careful with those. If you are prescribed prednisone, then you need to talk to your doctor about whether or not to continue aspirin.

Herbs or Supplements that Interact:

I also wanted to give you a little bonus here that I didn’t mention. So did you know that food is medicine? That means herbs are medicine and vitamins are medicine. All of those things you put in your mouth that affect your health, they are medicine.

So we need to be careful, too, with herbs and things like that, which we take along with prednisone.

One of the things we need to be careful with is St John’s wort. I could see somebody feeling depressed after taking prednisone and taking St John’s wort to cope. And that would be a terrible idea!

That is a major drug interaction. St. John’s wort changes your liver, making it break down prednisone faster than usual. That means the prednisone dose will not be enough anymore. Do not ever take St John’s wort with prednisone.

Other things that can affect prednisone include alfalfa and licorice.

Basically prednisone and licorice are counteracting each other. So you just don’t want to start licorice when you’re on high-dose prednisone if you need prednisone to do its job. The jury is still out on whether you can do licorice later on while on lower doses of prednisone. We’ll get back to you on that one.

I promised the five tips, the five ways to minimize prednisone side effects by coping with drug interactions.

So first of all is timing. Now the timing would be to not take certain things at the same time as other drugs. So for example, everybody on prednisone should be taking calcium and vitamin D, but calcium can interact with a lot of things because it’s an ion. Calcium has two little plus signs (+) next to it in the chemical name. That means it will bind other drugs.

Calcium will make it so that the other drugs are blocked so that your body doesn’t even absorb them. The calcium will just go in there and muck up the other drug so it doesn’t work. That’s why calcium should not ever be taken at the same time as thyroid medicines such as levothyroxine.

So the timing would be take the calcium differently from the thyroid medication like levothyroxine. You could like give at least half an hour, if not an hour in between.

Just to be clear, there’s not really a problem with taking your prednisone with your thyroid medication. They should be fine together since they’re both taken first thing in the morning.

The second one is to stop taking the drug that is less needed. So going back to our example of taking ibuprofen with prednisone, since they are doing that very similar things, they’re both, anti-inflammatory, they’re both pretty much giving you pain relief from like joint pain and things like, like that, then consider stopping the ibuprofen while you’re on prednisone.

That’s a possibility. Be sure to talk to your doctor before you stop any drug, but that’s one way to cope. These principles are true with other side effects with other medications as well. Other drugs that you’re taking, you can stop the one that’s less important after talking to your doctor.

You can go through your medications with your pharmacist or your doctor to decide which are the very most important, and which ones you can stop. We call that de-prescribing.

The third way to decrease drug interactions is to switch to a drug metabolized differently. Earlier I mentioned that the prednisone molecule goes through your body and then has to be activated by your liver. So if you are on other drugs that are using the liver to break them down, then you can switch to something that maybe is broken down by your kidney instead of your liver.

So for example, there’s a whole bunch of drugs for

And so if you use one that is broken down by a certain enzyme in the liver, instead of one that’s broken back down by another, that’s one way to cope. And then back to prednisone itself, one way to cope with timing and switching to another timeframe is using the drug Rayos. That’s an extended-release version of prednisone.

People who have things like rheumatoid arthritis can take Rayos at bedtime. The idea is that the prednisone is released slowly over the night so that when they wake up first thing in the morning that the prednisone has already kicked in. At the time of day when they’re having their very worst symptoms of rheumatoid arthritis that the Rayos has kicked in and is knocking those symptoms away for them.

Number four, if you have to use prednisone with ketoconazole. Ketoconazole is blocking the breaking down of prednisone. So that means there is more prednisone molecules drugs floating around in your body.

So what should we do? We should lower the dose of prednisone because there’s more floating around, less breaking down. So that’s what we should do when someone has a fungal infection and we need to give ketoconazole with prednisone.

The opposite here is to raise the dose with other drugs that have an interaction with prednisone, things like phenobarbital, phenytoin, and rifampin. They are classic drug interactions, drugs that increased the rate that prednisone is broken down. They make the liver work faster and that’s not necessarily a good thing.

These drugs are used for seizures. People may need more prednisone who have an anti-seizure need.

To summarize, the ideas I shared to avoid drug interactions were to:

2) discontinue the drug that’s not needed,

3) to switch to a drug that’s metabolized differently,

4) lower the dose of the prednisone, or

5) to raise the dose of the prednisone.

If you have questions about this, you should talk to your doctor and your pharmacist. They can help you troubleshoot this. They have the skills, especially your pharmacist, to optimize your medication therapy so that you can minimize the side effects and feel better.

And if you need any more tips about prednisone, I have a prednisone wellness checklist, and you can get it at the link below!