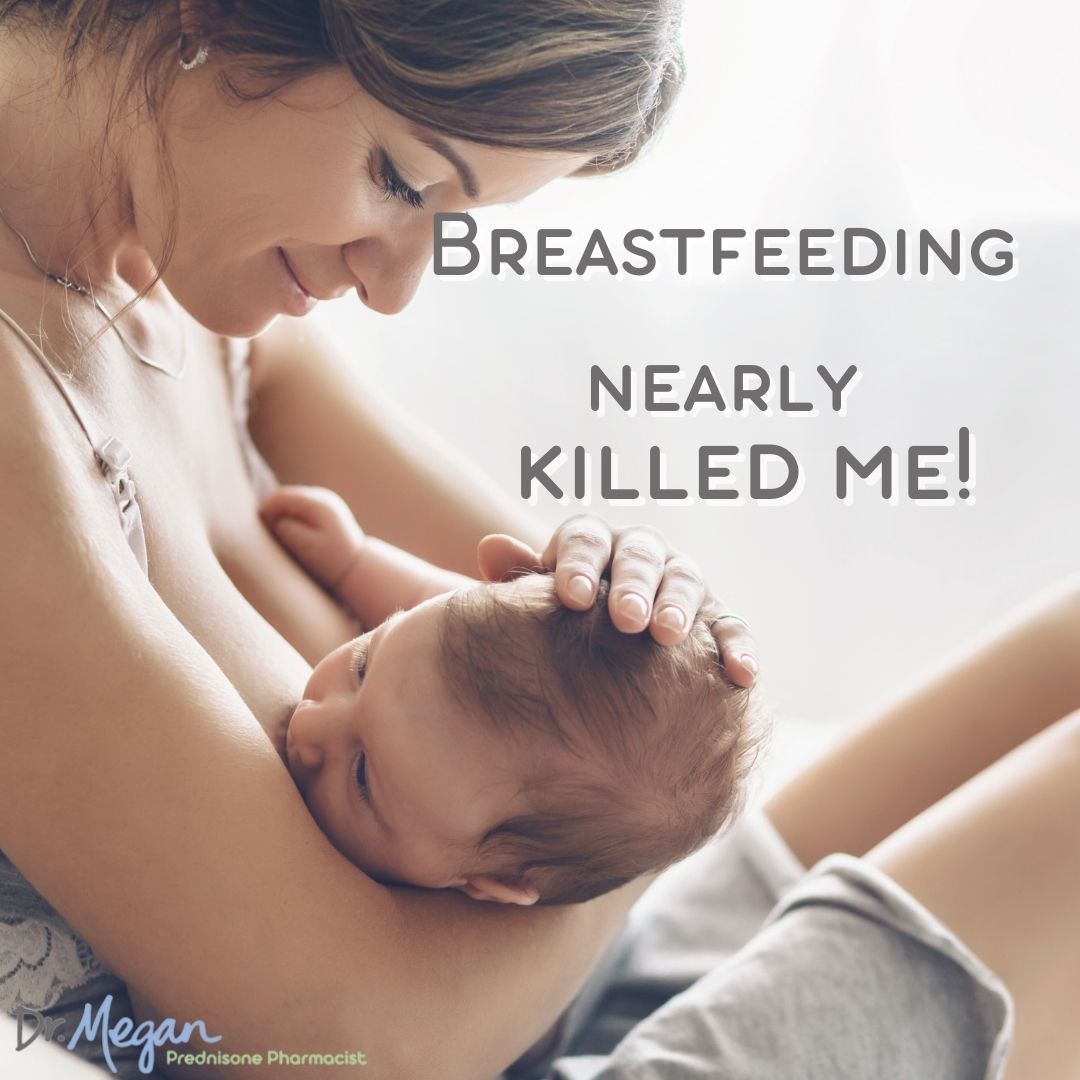 What to do when prescribed a new drug while breastfeeding

This article is for a young mother prescribed a drug like prednisone while breastfeeding who is not sure what to do. If this topic makes you squeamish, read the next article.

Using real patient cases, we will explore principles that will help this young mother decide what to do:

While a newlywed, I heard that statement from a young mother defending her choice to bottle feed to another young woman, who would later be a member of La Leche League, a network of advocates for breastfeeding. This mother told us the tale of trying to breastfeed her first child and then becoming so sick with mastitis that she was hospitalized for days, unsure whether she would survive to raise her baby. I had never heard of mastitis and had to look it up when I got home. Mastitis is an infection of the milk ducts in the breast that usually affects women in the first few weeks to months of breastfeeding. Women with mastitis experience blockage of a milk duct accompanied by swelling, redness, and heat around that spot on the breast. If the blockage proceeds to mastitis, the rest of the body is affected with high fevers, miserable aches and joint pains similar to the flu.

Principle #1: Never judge another woman for her choice to breastfeed or bottle feed.

We have no idea why a woman might choose one way to nourish her child over the other.

I had no idea how much this story foreshadowed my own life.

One weekend I was flat on my back with a 104-degree fever, my body infected by mastitis. I ached, moaned, was burning hot one moment, then even the blazing fireplace and dozens of blankets couldn’t get me warm the next. I called my nurse midwife for a prescription of antibiotics for this 7th round of mastitis I had endured after giving birth to four children. Slowly the fever and pain went away.

As I neared the end of the course of antibiotic, the unfathomable happened: I got mastitis again, but on the other side! I was feverish and miserable again and confused as to how the antibiotic failed to protect me from the next bout of misery, my 8th case of mastitis. My prescriber sent a new antibiotic to the pharmacy. This time near the end of the course of antibiotics, something even more surprising happened. I noticed while readying for bed that my skin started to change. Having learned about lethal skin rashes caused by antibiotics while I was earning my Doctor of Pharmacy degree to become a pharmacist, I was immediately concerned.

First my neck looked like a million red dots suddenly appeared. You know those little red dots that are often on people’s chests? Those are called cherry angiomas and are harmless, and I had a few of those. But now I had so many I could not count them. I googled and consulted UpToDate, a high quality medical reference, and determined that I didn’t have cherry angiomas, but something else: I had petechiae.

By morning when I made the appointment with the dermatologist, the painless red dot rash had spread all the way down my trunk, and onto my thighs.

Two hours later at their office, the red dots had spread to my feet, and now my thighs had some oddly-shaped bruises that didn’t come from trauma.

I even had a purpura lesion on my arm I remembered studying in school. My medical training told me I was bleeding inside.

The dermatology physician’s assistant asked his supervising medical doctor to check out the rash because it puzzled him. None of us could find a medical drug reference to show that my antibiotic had caused this rash, but they told me to stop taking it (which I had already done in my concern). I asked them to order a lab draw of blood clotting factors and they looked at me like I was crazy. Finally, they consented to order a CBC (complete blood count) to make sure my blood was okay. I knew it wasn’t. I dutifully took the order and succumbed to the needle in my elbow to check my blood.

Two hours after that, their office assistant frantically tracked me down to tell me my platelets were super low (12, with a normal range of 150-400) and I needed to be seen by my general doctor. But as soon as the general doctor heard why, he said there was nothing he could do for me anyway, and I needed to get to the emergency room (ER) as soon as possible.

When they drew my blood in the ER, my platelet level had dropped to 3, almost undetectably low. I was admitted into the hospital and told I had ITP and that I needed to stay for about a week – a week! I thought, how can I stay a week as a mother of four small children, one of whom relied on me for nourishment through breastmilk?

Receiving urgent care, the medical team gave me donor platelets, 60 mg of prednisone, and sleeping pills to deal with the imminent insomnia caused by the prednisone. Having been on the caregiving side in medical situations, it was foreign to be the powerless patient in a hospital.

My doctor was incredibly supportive of my continuing breastfeeding. Before administering any treatment, he asked me whether I wanted to use it or not depending on how it affected my milk supply.

First we discussed prednisone. I looked it up in my free app, LactMed, to see what it told me about breastfeeding while taking prednisone. LactMed was created by the National Institutes of Health of the U.S. government and is a collection of the research about how certain drugs affect the mother, the child, and the milk supply.

LactMed showed the following under prednisone:

“Amounts of prednisone in breastmilk are very low. No adverse effect have been reported in breastfed infants with maternal use of any corticosteroid during breastfeeding.”

I felt reassured that I could continue breastfeeding without a consequence to my baby.

But how could I continue breastfeeding while hospitalized? My baby couldn’t very well stay in my hospital room. My baby had never even used a bottle! If I pumped, what would I do with the breastmilk? How would I get the breastmilk to my baby?

Overwhelmed with all the medical issues piling up, I didn’t bother to open my breastpump. I just wanted it to all go away.

Then in walked an angel. Actually, a nursing student shadowing the new nurse on duty. This nursing student was an older woman attending nursing school after her children grew up. Her previous career? A lactation consultant!

A professional lactation consultant had randomly been assigned my room! She was only expected to watch the real nurse in action, and instead my Angel took action. She had heard about my baby’s need for breastmilk and asked me if I had pumped yet. She pulled it out, set it up, and shooed everyone out of the room so I could have some privacy while the machine extracted liquid gold nourishment for my baby.

Principle #4 Use a lactation consultant even if you think you don’t need one. You just might learn something.

Now I had two bottles of milk. She got a medical bucket and filled it with ice and placed my bottles in there to keep them cold.

The next time I needed to pump I ran into a problem: I ran out of bottles. At first the nurses tried to find a plastic bag to collect the milk, but nothing fit. Then they provided surprising and exceptional service: they arranged for a courier to bring bottles from the hospital campus where Labor & Delivery was located a few miles away. I was set. New bottles.

How to get the milk to baby?

The next logistical complication was how could I keep the milk cold and then how to get it home to my baby? A helpful nurse took one of those pink plastic bins at the hospital and filled it with ice for me. We kept the milk in there.

Then whenever someone visited me from my neighborhood, they kindly took my milk home so my baby could drink it.

Finally I was released from the hospital and allowed to go home to nurse my baby. Everything went fine until…

My platelets crashed again. They had to try a higher dose of prednisone or dexamethasone to see if it would put my platelets back into the normal range.

A normal dose would have probably left my milk supply intact. But this super high dose shocked my system.

I had previously skimmed over this detail on LactMed:

“High doses might occasionally cause temporary loss of milk supply.”

Prednisone shut down my milk-making factory. I completely dried up. I couldn’t understand what was happening until I re-read that short sentence above.

At that point, I had gone through so much physically and emotionally to keep my baby breastfed, I wanted to continue to do so. But there was nothing to give. No milk would come out, no matter what.

I made the heartwrenching decision to quit breastfeeding my baby since there was no milk left. I consulted with my midwife, prayed about it, and finally decided that it was time to stop. This was incredibly hard to do, since I’d nursed my other three babies until long past 12 months.

This baby needed my milk. I loved nursing. But there was no milk.

Once I’d decided that, there was no going back. Poor baby didn’t understand, and went on a hunger strike against the formula. Eventually we found a tolerable formula, but it took a while.

I felt ashamed every time I used a bottle of formula to feed my baby–I’d been such a proud mama, breastfeeding each of my babies, giving them all the nutrition they needed from my own body. And now I could no longer do that.

Principle #6: It’s okay to use formula to feed your baby.

Just as soon as my baby started to tolerate the formula, an ironic thing happened. I’d stopped my super high doses of dexamethasone since the four days were over. Several days later, guess what?

My milk came back!

But I’d already put my baby through so much, I couldn’t add to the confusion by restarting. I needed to heal from this ordeal, and my baby needed to finish the transition.

So we used formula for the next three months until transitioning to cow’s milk at 12 months.

I learned a lot about myself and about how other mothers feel. I’d been brought down from my proud pedestal as a breastfeeding-only mama and realized that it’s okay, it’s just fine to find alternative solutions when the ideal doesn’t work. Which brings me back to the first principle…

Principle #1: Never judge another woman for her choice to breastfeed or bottle feed.