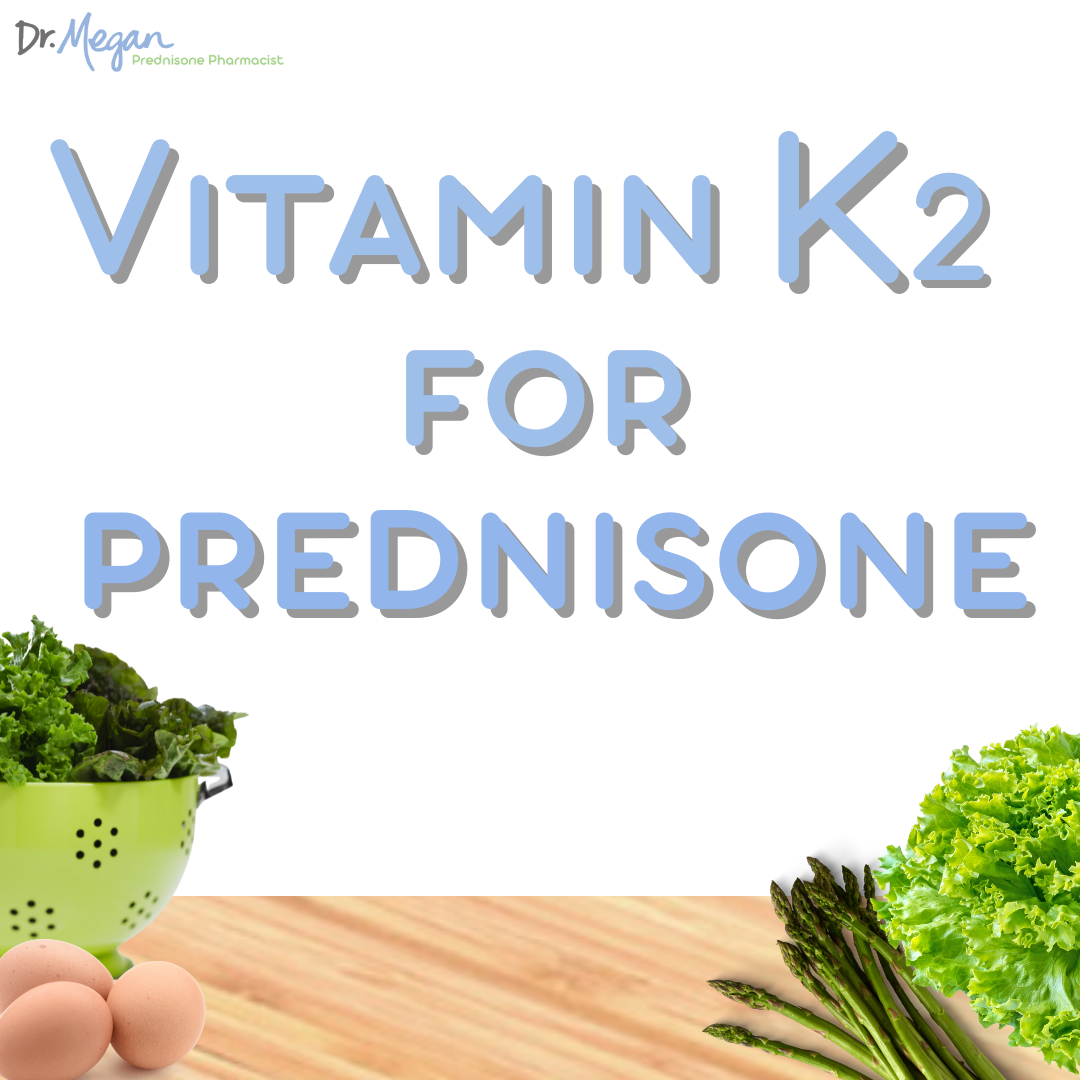 What could cilantro and green lettuce have to do with prednisone? We know prednisone depletes many nutrients and one of them is vitamin K. I want to talk all about vitamin K and prednisone in this article. I will answer all of these questions:

In pharmacy school, we learned about a lot of vitamins.  We focused on vitamin K1 because it causes it’s vital for care of people taking one of the most toxic drugs: that is warfarin or Coumadin.

If people who are taking that drug suddenly start eating lots of green leafy vegetables, it can actually mess them up and poison them and they could bleed to death or have a stroke or something. That would be terrible.

But what does that have to do with prednisone?

What I found out is that vitamin K has two different, main forms.

K1 is really important for clotting factors, for how vital it is to allow your body to stop bleeding. K1 is this amazing hormone that allows a whole cascade of things to happen so you don’t die and bleed to death.

We only learned about vitamin K1 in pharmacy school, but there’s also vitamin K2!

K2 is really important for bone health. Prednisone is the number one drug that depletes bones causing bone loss from calcium & vitamin D. One of vitamin D’s main functions is to ensure adequate levels of calcium in your blood. Vitamin K promotes calcium accumulation in your bones while reducing its accumulation in soft tissues such as blood vessels.

Prednisone causes more osteoporosis than any other drug.

Hands down, no competition there!

And all of its sister hormone steroids just like it, such as dexamethasone and hydrocortisone, also cause osteoporosis.

When I’m talking about vitamin K throughout the rest of this article, I’m going to be focusing on vitamin K2, because we’ve discovered that it has to do with bones.

Vitamin K2 looks a lot like K1. It has this pretty ring structure, and then it has all this little chain at the end. That is really important to help us have proper bone, not bone density, but bone quality.

We’ve all learned that calcium and vitamin D can help with bone density, right? You’ve heard of bone density tests and getting your DEXA scan to make sure you don’t have osteoporosis. But what we don’t hear about as often is bone quality. I didn’t hear about that at all in pharmacy school.

This was just a “lightbulb moment” for me. Finding out that there’s more to the bone and it’s not just a rock. It’s not dead. It’s not just calcium and vitamin D just sitting there. It’s living, it’s actively changing every day. In fact, over 10 years, your body replaces your entire skeleton of bone. We need to make sure that all of the nutrients, not just calcium and vitamin D, are in the proper balance in our bone.

Another thing I learned was how vital collagen is. I didn’t realize there was so much collagen holding the calcium, vitamin D and all of the other minerals together. It’s this collagen in a protein structure that binds the nutrients together.

What helps the collagen work properly?

One of the things that helps collagen do its job is vitamin K2. Collagen is the most common protein in the bone.

K2 helps with another protein in our bones! The second most common protein is called osteocalcin. Osteocalcin helps drive the calcium into the bones. It promotes the calcium accumulation in your bones.

Did you know that calcium isn’t just in your bones?

Calcium is also floating around in your blood system.

But when there’s too much calcium in your blood, it can deposit in your blood vessels. And that is a big problem that can lead to heart attacks, strokes and all sorts of like hardening of the artery!

Which prednisone side effects are related to vitamin K2?

What other prednisone side effects does calcium and vitamin K2 have to do with–specifically vitamin K2?

So we talked about osteoporosis–that’s the bone loss that can lead to breaks, fractures, shrunken spine.

Next is osteonecrosis. Necrosis is death, bone death, especially of the hip and shoulder joints. The little ball on the top of the bone dies. What we need to do is make sure that we prevent this death.

They’ve actually done a study to show that in rats (we don’t have any human trials yet) given a steroid called dexamethasone (that’s a lot like prednisone), K2 stopped the osteonecrosis in those rats.

That’s amazing! I’ve heard from lots of people that osteonecrosis (also known as avascular necrosis) is one of the worst side effects of prednisone because you have to get a hip replacement, even if you’re only in your 30s. It’s awful!

K2 can help with osteonecrosis.

Another thing I learned is how vital the bone metabolism and system is for your immune system. I didn’t realize how much of the bone had to do with your immune system, from the vitamin D to the vitamin K. Bone marrow helps your body create the proper cells that attack the bad things that we are wanting to kill–from bacteria to fungi, to viruses; your bone helps create those cells.

Finally, metabolism means how we use things up in our body. Bone helps with the proper metabolism of other nutrients. Having proper vitamin K2 helps with all of those things that prednisone is interfering with.

Which drugs can interact with vitamin K2?

Which other medications, like prednisone, interfere with vitamin K2?

The antibiotics are killing the bugs in your gut, the microbes, those little microorganisms that are in your gut. Also known as your “microbiome,” these tiny helpers are taking your food, breaking it down, and they’re making vitamin K2. When you take that antibiotic, it kills those good bacteria, and then you suddenly have less vitamin K2. The microbes can’t activate the vitamin K2 if they are killed by the antibiotic.

I mentioned this at the beginning of the article. Warfarin, which is also known as Coumadin, was originally discovered as a rat poison that they now give people who have clotting problems and want to prevent strokes and heart attacks, and other problems with that whole clotting cascade.

The next one is phenytoin or Dilantin. This medication is usually given to people who have seizure disorders. You should talk to your doctor before you take anything with vitamin K in it.

And then finally, this is important to understand: vitamin K2 is a fat-soluble vitamin. So if you’re taking a drug that depletes the fat, like the weight loss drug Orlistat, which is called Xenical, or bile acid sequestrants (some people take them for cholesterol-lowering). So if you’re on any of those things, it’s possible that they could be interacting with vitamin K2 because you’re not able to absorb it as well.

How to eat more K2

The best food sources of vitamin K are:

How can we get more vitamin K? I always recommend food first. So eating vitamins–the best way to do it as whole food.

Vitamin K1 is abundant in leafy, green vegetables, such as kale and spinach. If you want to get vitamin K1, green leafy vegetables are the best. Parsley is the highest source for K1. And then kale, spinach, Brussels sprouts. Those are all great sources of K1. But K1 isn’t what we really are hoping for. We’re really hoping for K2, and K2 is a lot harder to get from your diet.

Vitamin K2 is found in animal-sourced foods, such as liver, eggs, and cheese, and fermented foods like natto. Absorption into the bloodstream is enhanced when they are consumed with fat.

The best source is called natto, and it’s a fermented soy product that people in Japan eat in their traditional diet.

I’ve never eaten natto. I don’t know how to get natto. If you know about it, please let us know in the comments. All I know is it’s a fermented soy product in Japan, and it’s the very best source of vitamin K2.

MK-7 is the very highest quality version of vitamin K2. And why is that?

First of all, the longer the chain, the more fat-soluble it is. So that means:

That means it has more ability for your body to use it before it breaks it down in your liver and in your bones.

Vitamin K2 MK-7 is the one with the longer chain. It is kind of newer on the market. Scientists knew about it before, but they didn’t realize the difference between the MK -4 and the MK-7.

But now we found out how vital the MK-7 is for bone health. Natto is the best food source of vitamin K2 MK-7.

The 2nd best food source of vitamin K2 is the liver, beef liver, or pork liver. Eggs have a little bit of K2, and soft cheeses also have a little bit. Those are some foods sources you can go for ways to increase your absorption of it or would be to add fat.

So while we’re not focusing K1, a way to increase the absorption of K1 would be to add oil to your green leafy vegetables. So you could saute in oil, or you can eat an oil-based salad dressing. I think that might be one of the reasons we add salad dressing is so that we can actually absorb these fat-soluble vitamins better.

Another way to get vitamin K2 is to eat more of those soft cheeses or egg yolks.

Finally, you can supplement vitamin K2 MK-7. You can get this supplement by going on Amazon and buy it all alone as a standalone supplement, and it can cost like $50 a bottle. It’s high quality.

They’re usually derived from soy, such as the natto. There are a few derived from other sources like bacteria, but the most common is that soy-derived from the version.

They also have it in combination with other bone-building ingredients like magnesium, calcium, and vitamin D. You can buy like Bone Strength, one on Amazon, and those are great for people on prednisone. Or here are two brands I recommend, and they come with vitamin D:

Best partner while you’re on Prednisone

Now I wanted to let you know that I’ve put it all together in one product. So it’s not just vitamin K2 MK-7. It’s that, plus the calcium and magnesium, and not just any magnesium, but the best kind of magnesium: glycinate. It’s vitamin D plus all the other nutrients that prednisone depletes, all of them. They’re all here!

It’s called Nutranize Zone. You get the Morning bottle and just take two in the morning, plus you get the Bedtime bottle and take two at bedtime, all for the price of one supplement. You can toss all your other supplements away because this has everything you need in it.

I personally designed it as a pharmacist, using my clinical training. Having actually encapsulated thousands of capsules in my career. Plus using my doctorate of pharmacy training.

Knowing that not only do you have all of these ingredients that help you feel better, but you’re giving back those that are being depleted. You can find it at Nutranize.com!