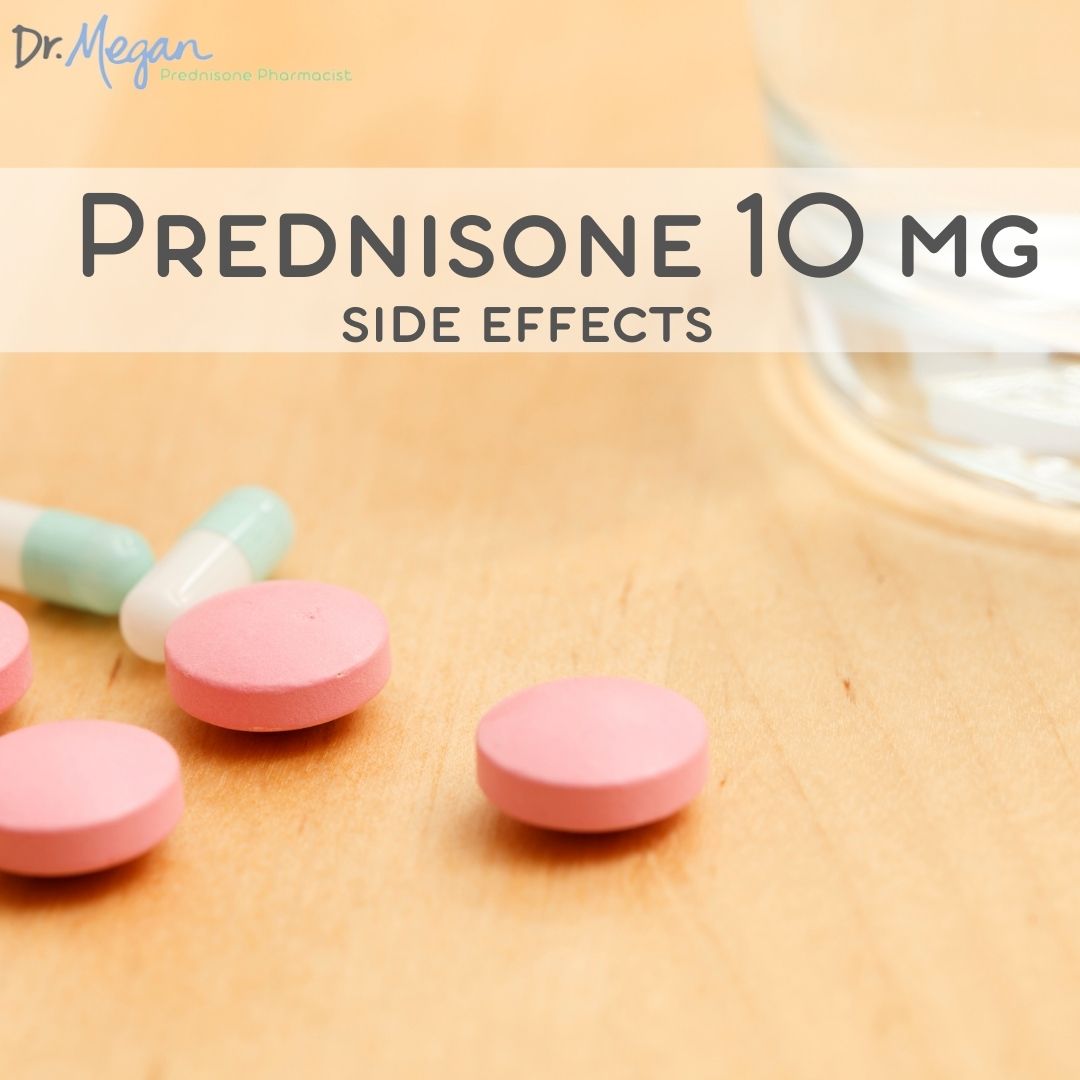 The dose makes the poison, right? Prednisone is one of the most toxic medications there is, but is it possible that a higher dose is more toxic than a lower dose? Find out today in this video and article about the side effects of lower doses of prednisone, specifically below 10 milligrams.

Things covered in this article:

So in the past, I have done a series of videos about prednisone side effects. First, I’ll show you my personal side effects experience, and then we’ll see which side effects happen at this lower dose. And finally, where you can find more answers at the bottom. You’ll see the references, the five places where I got the data, and those include the top prescription drug references available for pharmacists today.

This is me. I took prednisone for 9 months and these are the side effects that I experienced. I took high and lower doses, went on a roller coaster of miserable side effects. Because of that, I had my own personal experience of what I thought was a high dose side effect. Some of them that got worse on high dose include insomnia and my moon face and some of them got better at lower doses. Now let’s see which ones got better and which get worse at low doses.

What are Common Low Dose Prednisone Side Effects?

Sources of Information about Low-Dose Prednisone Side Effects

I searched five sources of this data for prednisone lower dose side effects, including those prescription drug references pictured above and DailyMed. All five sources would include the exact same list, right? I thought they would all say a certain side effect and on all of them. For example, I expected that they’d all say “weight gain,” or they’d all say “insomnia,” but that wasn’t true.

Read more about how I discovered the data that’s missing!

So moon face is the one that they often had. All of them had five different sources and they had different ways of describing moon face.

For instance, some of them called it hypercortisolism or they could have called it Cushing syndrome or Cushing’s disease or a cushingoid state and appearance. Another side effect that was listed on all five sources included side effects that have to do with your eyes. So there are the two main ones that we need to be worried about.

So you lose your vision. Glaucoma is reversible, though, if you stop taking prednisone, glaucoma can go away.

Is Prednisone Good for the Heart?

Now the heart, the heart is really important. Even on prednisone low dose, according to one study, they called it medium doses of 7.5 mg or more. It can cause heart failure. Prednisone has an amazing way of affecting the heart in a bad way.

It can cause CHF, they also call it congestive heart failure or cardiac failure. These are all possible ways of describing essentially the harm that prednisone can do to a heart.

Next is one that I think should have been on every single list, but is only now on four sources. We’ve dropped down to four sources. This one I think everybody should be aware of and that is the mood side effects which is quite common no matter what your dose is!

I don’t think enough people are warned about mood-related changes that to expect when you’re taking prednisone. I hear from people more often about this than any other side effect. They often say, “I wish someone had told me about this because if I had known, I might not have taken it.”

What Mood Changes to Expect on Low-Dose Prednisone?

So at the beginning of taking prednisone, you might feel euphoria; like this beautiful, wonderful feeling of extra energy, of being able to clean your house of being able to do more than you’ve ever done while suffering your condition.

Finally, the condition is under control and you have symptom relief since the prednisone is kicking in!

Whatever the thing is that you’re taking prednisone for, you can actually fight back because prednisone is working! It’s not just that it’s working but it also is elevating your mood.

So for those people, they wished they hadn’t taken prednisone, that prednisone had not caused that side effect. This kind of “revving you up” is common early, when first taking prednisone. And then later, after taking prednisone a while, that high energy can kind of go down, crash, and turn into depression.

These are the mood side effects you can expect when you are on lower doses.

We are still on four sources and now we’re moving on to the skin. And what you can see at the very bottom that surprised me is that this is a “most common” side effect, according to one of the references. I find that surprising because I don’t hear that thin skin is most common.

I almost never hear actually, anybody talk about their skin when it comes to prednisone low dose. It’s definitely a real side effect. It’s just not the thing people mention to me. I think it might be more common when prednisone is used topically, which means it’s actually probably not actually prednisone causing the thin skin. It’s probably one of the prednisone sister-steroids, like a steroid cream or a steroid ointment that people would rub on their hands or wherever they’re having a rash or an outbreak.

That’s more likely to have thin fragile skin, for example, people with eczema, if they only use hydrocortisone cream that you can buy over the counter.

Here’s a quick story about thinning skin with hydrocortisone.

My brother actually thought that when his fingers erupted with eczema, that he could just use hydrocortisone cream as an emollient, just to keep his hands soft. Eventually it made his hands, his fingers with thin skin, and turn kind of gray. It was shocking. So don’t use steroid cream all the time. You need to use it sparingly. And with all steroids, use just the lowest effective dose. For creams, that’s usually once or twice a day, not 10 times a day like he was doing.

But people do legitimately get this from oral prednisone, from the pill, as well. I hear especially from older women about their skin thinning. They can get parchment-like skin; skin that just tears, just like cutting it, like ripping a piece of paper. That’s how easily their skin can tear. So this definitely does happen, but I don’t think it’s the most common.

Yes, the thin skin is reversible, but the timing isn’t sure. It could happen at lower and lower doses, or it might not reverse until after stopping steroids.

The next type of skin side effects at low doses are other things that I don’t consider very common at all, including red dots, just a little red flat dot on your skin called petechiae. It’s not like acne or some rash on top of the skin. It’s under the skin.

It actually indicates there’s tiny bit of bleeding under the skin, as does the painless bruises, which the fancy word is ecchymoses. Both of those indicate that there’s under-the-skin bleeding.

Usually, that’s of no concern, but it can be if you’re like me and you’re taking prednisone for something like a bleeding disorder.

Can Prednisone Cause Red Face?

Next, prednisone can cause red face or facial erythema.

I personally got that. I would get hot flashes and my cheeks would turn red. It definitely happens, but I don’t think this is one of the side effects people should be concerned about.

It’s much rarer than this would have you think based on the number of sources that are always mentioning it in contrast to this side effect, wait, I think this should have been on all five sources, but now we’re down to only three sources. Only three sources mentioned weight gain as a side effect of prednisone, which is just shocking to me because statistically, 70% of people on prednisone are going to gain weight. And even at low doses, we gain weight gain as possible.

So, but it is usually in certain places, the moon face the big fat belly, which they’re calling central adiposity or abdominal obesity. And often there can be a fat deposit on the back of the neck called a Buffalo hump. None of this is what you want, but you should be aware that it is possible to even at low doses.

If you will. And premature atherosclerotic disease, these are all possible even at low doses. So it’s, you might have to go on a medication to counteract that like a Stanton like a Lipitor type of thing. Another LoDo side effect includes acne. And this is another skin thing. So on that weight gain, it made you look like you might be pregnant. And this side effect makes you look like a teenager. So prednisone turns you into a pregnant teenager. Just kidding. No, it doesn’t. It might actually make you feel a whole lot older.

Like it, me, it made me feel like I had hot flashes and like I was an older person instead of a younger person, but acne is to be expected from prednisone. I also don’t consider this one to be very common. It happens, but it’s not the most common thing to happen.

Does prednisone cause hair loss?

I personally lost a third of my hair after taking prednisone. Like after I stopped taking prednisone, two months later, it all fell out. So it was not what I expected and I had to chop it off. And now I have a new hairdo.

Does Prednisone Cause Nosebleeds?

All right, now we’re down to one source. This one source said that nosebleeds or the fancy medical term, epistaxis, is common at doses over five milligrams. So we’re focusing on any side effect that was less than 10 milligrams. And so those bleeds, I personally never experienced a nose bleed, while on prednisone.

I have actually never been told by anyone that they’ve experienced a nosebleed. So this is not common, but it’s listed in these random lists of side effects that I personally don’t think mean much at all.

How to Find if a Side Effect is From Prednisone

That is why I created a list that compiles them all together, the Ultimate List of Prednisone Side Effects

You can click through to get the ultimate list and you can search. Is this a side effect? And then you can see how many of those references referred to it. How it’s common, according to any of them, or if like, there’s just lots of ways you can search, you can find out the medical term and then the simple term.